Fossils
Amber
Burmese Amber
Also called Burmite, Burma Amber, and Myanmar Amber, Burmese Amber comes from the northern region of Myanmar (formerly known as Burma) and neighboring countries. Having formed about 99 million years ago, this widely varied, yellow to almost red, amber has been prized since the Han dynasty of China 2200 years ago. Because it forms differently than Baltic amber, Burma Amber is harder. This leads to natural cracks inside the amber. As with other ambers, preservation of inclusions like plants and insects is remarkable.
Try the parent category 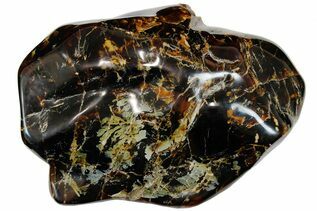 Where Is Burmese Amber Found?

Burmese amber is found in the northern regions of Myanmar (formerly Burma) particularly in Kachen State, and surrounding countries. Amber has been mined here for centuries, primarily for use in jewelry and makes up a major source of income for people in the region.

Is Burmese Amber The Same As Burmite?

Yes. Myanmar Amber, Burmite, Burma Amber and Burmese Amber are all different names for the same thing. Burma became Myanmar in 1989. Burmite was the most common name for Burma Amber and is still commonly used today.

There is a lot of false information on the Internet that amber is illegal to export from Myanmar (Burma). Under their law fossils may not be exported from the country, but under Myanmar Mines Law amber (including amber with insect inclusions) is classified as a gemstone, and may be exported. Amber has been a large export from the region for centuries and it's mining and sale makes up a significant part of the local economy with an estimated 10 tons exported annually.

How Old Is Burmese Amber?

Burmese Amber was formed during the Late Cretaceous, approximately 99 million years ago. This means it was formed at the same time that dinosaurs were roaming the earth.

How Is The Age Of Amber Determined?

The most common method of determining amber’s age is looking at the insects contained within it. Amber often contains the fossil remains of extinct insects. By determining when the insects became extinct, it can be said that the amber must be at least as old. As technology has progressed, more technical methods of dating amber have been developed. With amber on of the more effective methods of determining age is called Exomethylene Signature dating. This is basically a comparison of the decay of chemicals trapped in amber to the levels of the same chemicals in specimens of know age. Spectroscopy and Differential Scanning Calorimetry can also be used to determine the age of amber.

How Is Burmese Amber Different From Other Amber?

Burmese amber, like all amber is fossilized tree resin. It is older than most amber at 99 million years old (Baltic Amber is 44 myo) and has gone through some different geologic processes. It formed in a very geologically active area and experienced increased heat and pressure. This made it harder than most other ambers, but also created a good deal of internal cracking than other ambers.

Have Dinosaur Fossils Been Found In Burmese Amber?

Burmese amber is turning out to be one of the most interesting sources of fossils. The tail of a small dinosaur was found in 2015, and even the outline of a fledgling bird has been found. Perhaps the most intriguing find has been the discovery of a sea dwelling ammonite preserved in Burmese amber. In addition to the surprises, Burmese amber has been described as the best source of Cenomanian insect fossils.

What Were The Historic Uses Of Burmese Amber?

Burmese Amber has been a highly sought artistic material in China since the Han Dynasty about 2200 years ago. It was thought to contain the soul of a tiger and considered a symbol of courage and valor. It was introduced to the Roman Empire by Marco Polo along the Silk Road. It came to Europe in the late 19th century.

How Do You Tell If Amber Is Authentic?

Amber might be the most frequently faked fossil. With the invention of plastics it has become even easier. Sometimes holes will even be drilled in real amber, modern insects added and the holes filled in with resin. Be very suspicious of large insects and other fossils preserved in amber, as larger insects can typically struggle free.