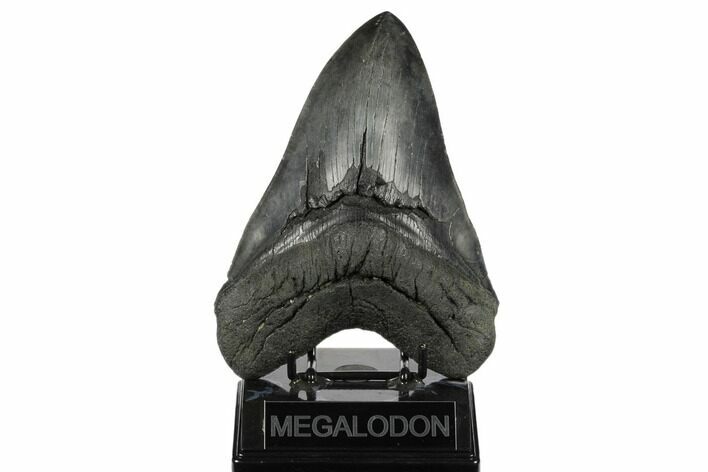 This is a massive, 6.32" long Megalodon tooth collected from a river in South Carolina. Complete meg teeth of 6 inches are very rare, and for each 1/10th of an inch over they get exponentially more rare. This is a beast, weighing 17 ounces and being 4.54" wide.

Like nearly all the meg teeth we sell there hasn't been any repair or restoration. The serrations on the edge of the blade are worn but most are still visible.

Megalodon was not only the biggest and baddest prehistoric shark that ever lived, it was the largest marine predator in the history of the planet. Today’s great white sharks would be a mere bite size snack for this monster. It terrorized the diverse ocean waters around the world from 15.9 to 2.6 million years ago (late Oligocene to early Pleistocene). This massive, extinct species of shark was estimated to grow to nearly 60 feet in length and has often been declared the greatest vertebrate predator which ever lived.

Reconstructed jaws on display at the National Aquarium in Baltimore.


These mega-tooth sharks were a giant and more robust version of the great white. They had 276 teeth in 5 rows and like todays sharks shed their teeth throughout their lifetime. The largest Megalodon teeth on record reached a staggering 7.5 inches (190mm). Compare this to the largest great whites whose teeth top out around 3 inches long. Wow.