FOSSILERA
MINERALS
FOSSILS FOR SALE
NEW
CRYSTALS
ABOUT
Minerals & Crystals
Garnets
Almandine
Red Embers Garnets
The Red Embers Garnet Mine (previously known as the Two Fat Guys Mine) is located in Erving, Massachusetts. This mine is known for producing vibrant red, translucent almandine garnets in a graphite matrix. The mining of these specimens began over 20 years ago and to this day is still ongoing. The vein from which these specimens are extracted is composed primarily of graphite that ranges in size from 1 foot wide, up to 6 feet wide in some spots. The garnets are scattered throughout this graphite matrix along with black dravite tourmaline crystals.

The garnets from this mine exhibit vibrant red coloration, especially when backlit. For this reason, garnet specimens that are left in the graphite matrix are often worked along both sides to allow light to pass through the garnet, primarily with the help of air-abrasives. Some garnets are removed from the matrix to be cut and polished for jewelry application.
5 Items ($295 to $495) 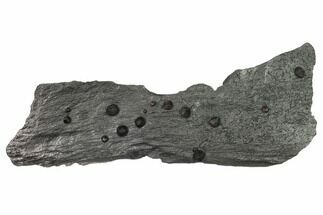 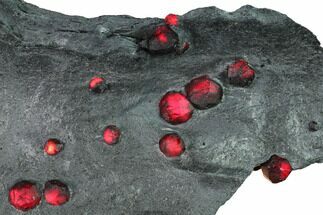 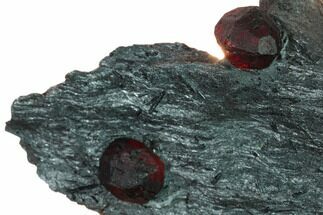 Watch How They Glow