Fossils
Crabs, Lobsters, Shrimp, etc
HERE ARE SOME OTHER SIMILAR FOSSILS FOR SALE 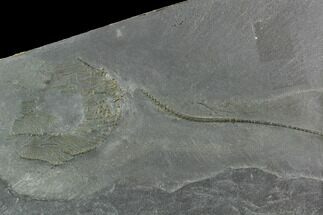 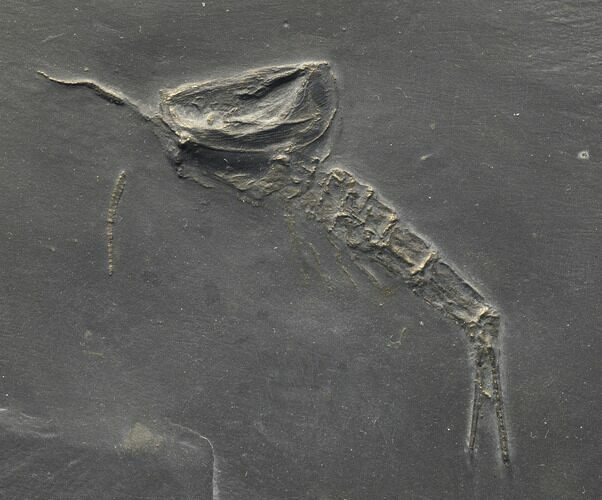 This complete and stunningly beautiful Phyllocarid (Nahecaris steurtzi) with soft bodied preservation from the Hunsrück Slate of Germany. It has fine antennae and articulated legs clearly defined with pyrite. The fossil aesthetically placed on a solid, unbroken slab.

As a bonus, there is a partial Chotecops ferdinandi trilobite with some soft tissue preservation on the backside of the plate. Finally, included with the specimen is a digital file of the X-ray that was taken to identify the fossil. With the closure of the slate quarries, specimens off like this wonderfully preserved 390 million year old, Nahecaris steurtzi will only come from established collections.

The lower Devonian (lower Emsian) slates from Bundenback have been quarried for roofing material for centuries. Quarrying continued until the 1960s, when the competition from cheaper synthetic or imported slate resulted in production decline. The last pit closed in 2000. Mining of Hunsrück slate was important for the discovery of Paleozoic fossils. Although not rare, fossils can only be found through extensive mining of slate and time consuming preparation. Fossils are hard to see lying under the surface of dark slate. In 1970, Wilhelm Stürmer, a chemical physicist and radiologist developed a new method to examine the Hunsrück slate fossils using medium energy X-rays. The Bundenbach “Hunsruck Slate is famous for yeilding one of the most important assemblages of Paleozoic fossils, with 260 animal species including mollusks, echinoderms and arthropods - of which the phacopid trilobite Chotecops is certainly the most abundant.

Phyllocarid crustaceans, like Nahecaris are less common and are rarely found completely intact. With lightly sclerotized exoskeletons, they are typically found as disarticulated headsheild pieces, missing the anterior section and telson.

Bundenbach is one of the few fossil sites that features soft tissue preservation, with many fossils coated with pyrite. Preservation of soft tissues as fossils normally requires rapid burial in an anoxic (little or no oxygen) sediment where the decomposition of the organic matter is halted early. The pyritization found in Bundenbach fossils facilitated preservation and enhanced the inherent beauty of the fossils.
View All Soft-Bodied Fossils
SOLD
DETAILS
SPECIES
Nahecaris steurtzi (Phyllocarid), Chotecops ferdinandi (Trilobite)
AGE
Lower Devonian, Emsian Stage (~390 million years) 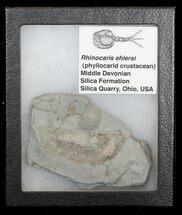 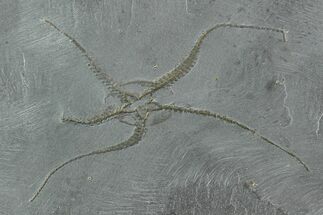 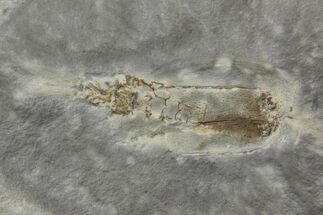