Fossils
Echinoderms
Carpoids
Carpoids are extinct, early echinoderms related to starfish and sea urchins. These primitive animals were marine filter feeders with very simple anatomy. Carpoids first appeared in the fossil record in the Cambrian Period with some types surviving into the Carboniferous Period. 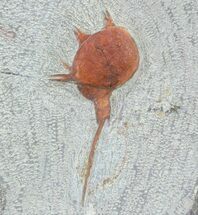 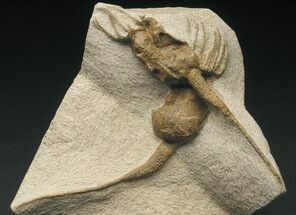 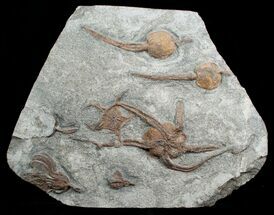 Carpoids are an enigmatic organisms. They are early echinoderms related to starfish and sea urchins. Unlike modern echinoderms, carpoids lack the five fold radial symmetry and water vascular system. Carpoids were asymmetric or bilaterally symmetric. Like other echinoderms they did possess a skeleton of calcite plates. They consisted of, depending on species, one or two ambulacra (filtering appendages), a theca (“head”) and a three section stele (“tail”). It is believed that they are early ancestors of starfish and other echinoderms but it is also possible that they are an early ancestor of the Chordates. This is the phylum to which humans belong. This is a contentious theory based on the presence or absence of early gills in carpoids. Because these organisms are only known from fossils, gills are hard to identify accurately. 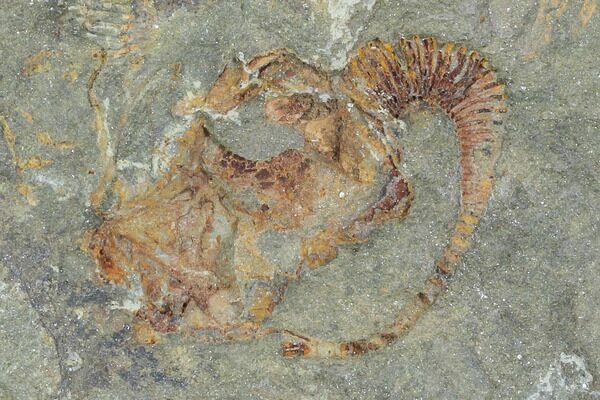 Carpoids were an unusual looking organism. The vital organs of the animal were contained in a theca. Internal organs were surrounded by calcite plates. Depending on the species of carpoid, one or two ambulacrum extended from one end of the theca. These were appendages for filtering water for food. A mouth was located at the base of the ambulacrum if there was just one or between them if there were two. From the other end of the theca, the three section stele (“tail”) extended. This was used either for locomotion or to hold the organism in place if sessile. That is fixed in one location. It is thought that carpoids grew up to about 4 inches (10cm).

Carpoids first evolved during the Middle Cambrian period and disappeared from the fossil record in the Early Devonian.

Carpoids In The Fossil Record